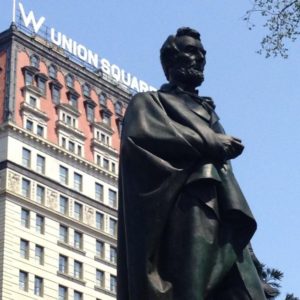 Abraham Lincoln visited New York six times in his life, and his body passed through the city en route to Springfield IL after he was assassinated in 1865.  Though his time in NYC was extremely short, his visits were significant, particularly his visit in February 1860 to speak at the Cooper Union (or the Cooper Institute).  That speech in front of 1,500 influential New York Republicans such as Horace Greeley, William Cullen Bryant, and Henry Raymond is credited with making Lincoln into a viable candidate for the president, which he ultimately won.

The New York that Lincoln saw was very different than that of today.  In Lincoln’s time the tallest structure in the city was Trinity Church.  Public transport was extremely limited.  The tallest office or residential buildings had 5-6 floors.  Most buildings were still wood-frame structures.  And demographically, while the city was experiencing tremendous growth through immigration, the city had yet to experience the massive waves of immigrants that would later arrive from southern and eastern Europe, Asia, and Latin America.  But there are still a number of places you can visit that Lincoln actually visited himself.  For visitors who want to learn about Lincoln in NY, here are my most recommended sites: 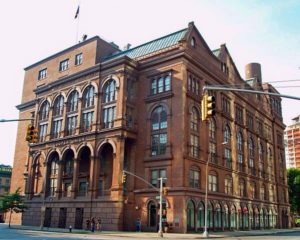 The Cooper Union, where Lincoln spoke on February 27th 1860.

The Cooper Union’s Foundation Building (30 Cooper Sq,) was built in 1859 as a college founded by philanthropist Peter Cooper.  The building featured, and still does, an auditorium at the basement level called the Great Hall.  Over the years the Hall has hosted many famous speakers including 7 US presidents, including (prior to his presidency obviously) Abraham Lincoln.  His speech in 1860, sometimes referred to as the ‘Might makes right” speech, played a pivotal role in making Lincoln a major candidate for President in 1860.

Officially the Great Hall is closed to the public except at events, which are frequently hosted and cover a variety of interest topics.  However, it is possible sometimes to wander in during the day–it depends on the mood of the guard.  Go in the south entrance facing Cooper Square and go down the ramp to the right to the Great Hall.  The Hall still has the original lectern that Lincoln used.  On the side of the Hall are several portraits of figures associated with Cooper Union, including a portrait of Lincoln as he looked in 1860.  There’s also an accompanying small but excellent exhibit on the history of the Great Hall, with several busts, statues, infographs, artifacts pictures and more. 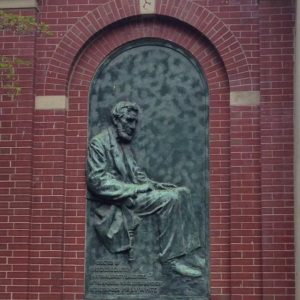 Relief of Lincoln outside Plymouth Church

Lincoln’s original invitation to speak at in NY was to the Plymouth Church in today’s Brooklyn Heights on Orange St, the church of the famous abolitionist minister Henry Ward Beecher.  (It was referred to in the invitation as ‘Beecher’s Church’.).  Though the venue was moved to Manhattan, Lincoln did attend a service here twice, on Sunday May 26th and then two weeks later as Lincoln journeyed back to Springfield.  The exterior wall of the church features a relief of Lincoln sitting in the church, along with statue of Beecher.   Inside the seat where Lincoln sat is marked (facing the pulpit, on the left side of the middle row near the front).  Outside the sanctuary, there is an arcade with wonderful exhibits on the history of the church, particularly its role in the Underground Railroad and the abolitionist movement.  You can tour inside the church on Sundays at 12:30 after the services. 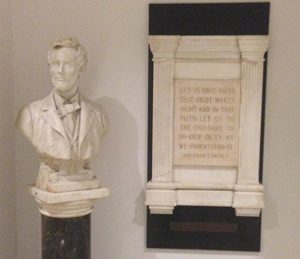 Bust of Lincoln at the Cooper Union with the most famous words from his speech in 1860.

3: The Lincoln Depot Museum in Peekskill NY.
Though an hour from NY by train or car, this modest museum is in a former train station that Lincoln actually visited in 1861   The museum, which can be taken in in less than an hour easily, is solely devoted in Lincoln and particularly covers events in New York State.  Featuring a number of artifacts from the time, it’s a wonderful spot for Lincoln-lovers.  It’s currently open on weekends only from May to November, from 1-4.  It may not be worth a day trip from New York City by itself, but if you combine it with other sites in the Hudson Valley (Bear Mountain State Park and West Point are both nearby and the city also boasts the Peekskill Museum.).  Though car is probably the best way to visit so you can easily combine it with other area attractions, it is a 5-minute walk from the Peekskill Metro-North station which you can reach from Grand Central Terminal.

City Hall and the surrounding Commons was still the center of much of the city’s life in 1860.  The city’s premier hotel, the Astor House, where Lincoln stayed, was across the street.  It was closed and torn down in 1913 and the Astor Building stands in its place..  Many of the best shops were nearby.  The city’s publishing industry was across the road at Printing House Square.  And the city’s Financial District was a short walk away on Wall Street.  The only building in the area still standing that Abraham Lincoln actually visited is City Hall, where he was received as President-Elect in 1861 and lay in state in 1865.  But Lincoln did much else in the area.  He bought a hat at Knox Hat store at 212 Broadway, just south.  He probably visited the offices of the New York Tribune which stood near the statue of Benjamin Franklin near 42 Park Row.  And north of the park is the Sun Building, built in 1846 as A.T. Stewart’s Marble Palace, the city’s first department store and one of several places visited by Mary Todd Lincoln on her shopping visits. 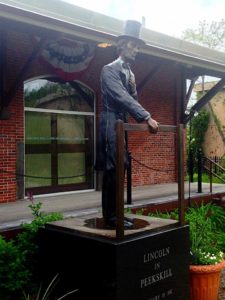 Statue of Lincoln outside the Lincoln Depot Museum 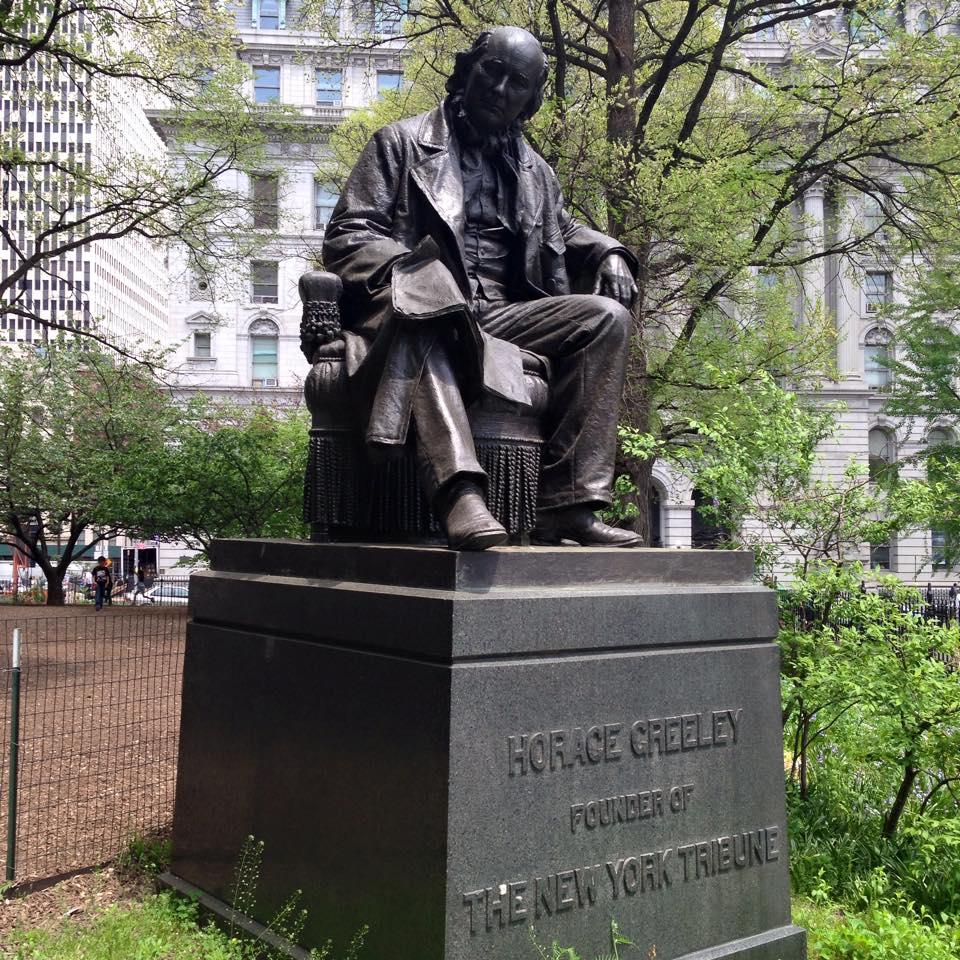 Other locations:
The Haughwout Building at Broome and Broadway in SoHo.  This is where Mary Todd Lincoln purchased the Lincoln China Service for the White House in 1861.  The 1857 cast iron gem was then Eder V. Haughwout’s Emporium.  It also featured the first ever passenger elevator in a commercial building.

359 Broadway in Tribeca.  This relatively non-descript 5-story structure is the only existing building that housed one of Mathew Brady’s photo studios.  Though Lincoln actually visited his studio on Bleecker and Broadway, that buliding no longer exists.  Brady was the most famous photographer of the time and photographed Lincoln on the day of the Cooper Union speech, and several times later on.  That photograph was widely distributed during the 1860 election.

The Morgan General Mail Facility on 10th Avenue in Hell’s Kitchen between 28th-30th Streets was the location of the Hudson River Railroad Depot where Lincoln arrived in 1861 as President-Elect.  He was the first passenger in the newly opened station.  A plaque on 30th Street marks the history of the location.

There are statues of Lincoln at Union Square, Prospect Park (both are by Henry Kirke Brown), the Lincoln Houses at Madison and 133rd in Harlem, and outside the New-York Historical Society.  The NYHS and other area museums also frequently feature exhibits related to Lincoln, many of which are still viewable online.  Also check the Museum of the City of New York, the Metropolitan Museum of Art, the Morgan Library, the New York Public Library, and others.

McSorley’s Old Alehouse on 7th Street just east of the Cooper Union.  Contrary to popular myth, Lincoln did not drink here.  But who cares?  It was open during Lincoln’s lifetime and is one of New York’s most celebrated olde drinking taverns and a good spot for lunch while touring New York.  Its interior is filled with New York history and they claim that Lincoln’s chair still hangs from the ceiling. 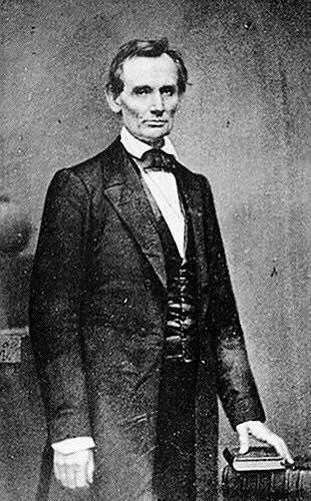