The Dead of Antietam: Alexander Gardner’s powerful images from the battle

In October 1862 a groundbreaking exhibition happened in New York City.  At Mathew Brady’s studio at 785 Broadway at 10th Street, people lined up around the block to enter an exhibit of photographs taken at the front of the Civil War taken by his assistant Alexander Gardner.  Above the entrance was a sign simply saying, the ‘Dead at Antietam.’   Inside were some of the most chilling and morbid images that had ever been put on public display.  This was to rank as one of the most important visual arts exhibitions in the history of New York, and it helped establish Mathew Brady as the ‘father of photojournalism.’ 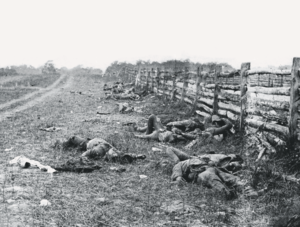 A field strewn with dead bodies.  Time Magazine chose this photo as one of the 100 ‘Most Influential Images of All Time’.

It was said that during the Vietnam War, television journalists brought the war into our living rooms.  Mathew Brady accomplished this with his photos a century earlier.  The images showed grisly scenes of carnage from the battlefield many of the viewers had never seen before.  Fields littered with dead bodies of soldiers and animals.  Also shown were damaged buildings and a battered landscape.  In today’s era when the military often censors photos of dead soldiers, it is striking that many of the dead bodies had their faces and even their eyes visible with ghastly stares.  An anonymous New York Times author wrote, it was as if Brady had “brought bodies and laid them in our dooryards and along the streets.” 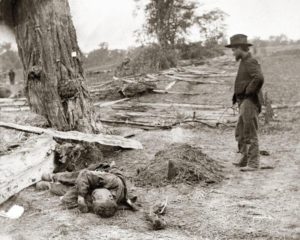 Gardner made an effort to highlight dramatic contrasts in his photos.  Here we see an unburied Confederate soldier right next to a grave of a buried Union soldier.

The Battle of Antietam was fought on September 17th 1862 near Sharpsburg, Maryland. The battle resulted in no significant victory for either side but the Union held the battlefield at the end.  In a single day there were 3,700 soldiers killed and 22,700 total casualties.  It was the bloodiest single day of battle in US history.  The site, like Gettysburg, is now a national battlefield preserved by the National Park Service. 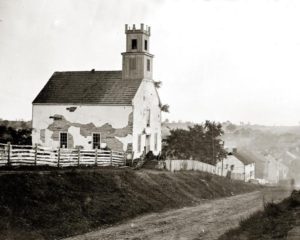 Immediately after the battle, Brady dispatched his assistant Alexander Gardner to Antietam to photograph the scene.  He arrived two days later and it was the first time a battlefield was photographed with the dead still on the field.  Though Union soldiers were largely buried by the time of Gardner’s arrival, the field was under Union control and thus Confederate soldiers remained largely unburied.  Gardner would return two weeks later, this time photographing Abraham Lincoln’s visit to the site. 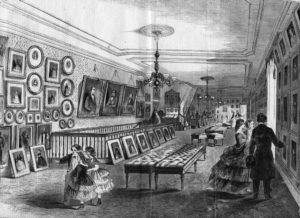 Mathew Brady’s ‘National Portrait Gallery’ inside his 10th Street Studio.  It was a popular attraction and a precursor to later museums.

By the start of the Civil War in 1861, Mathew Brady was the most famous photographer in America.  He had studied daguerreotypes in New York under Samuel Morse (of the telegraph), who himself had traveled to Europe and studied under Louis Daguerre.  Brady opened his first photography studio in 1844 at Fulton and Broadway (he later moved uptown).  At the beginning he mostly made studio portraits.  He won a prize in 1851 at the World’s Fair in London for the best daguerreotype.  He became world renowned and people came from all over the US and abroad to sit for photos with Mathew Brady, including Edgar Allen Poe, Daniel Webster, Edward the Prince of Wales, Jenny Lind, and most famously Abraham Lincoln.  In addition to taking photos, his studio was a gallery of photos of famous Americans, which became popular attraction a precursor to later museums and art galleries. 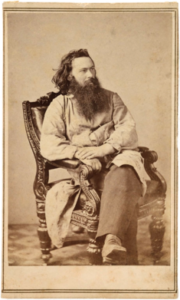 Alexander Gardner was born and raised in Scotland and worked as a journalist.  He traveled to the 1851 World’s Fair in London and was impressed by Brady’s photographs.  He later immigrated to the US and found work at Brady’s studio.  In 1858 Brady sent him to Washington to run Brady’s Washington studio.  Starting in the late 1850s, Brady’s eyesight began to fail and his work was increasingly done by assistants (though always credited as a ‘Brady’ photograph).  During his lifetime, Gardner took 14 photos of Abraham Lincoln, more than any other photographer, including three at Antietam.  Brady sent his top photographer Gardner to Antietam to document the battlefield.  After Antietam, Gardner would leave Brady and work independently, eventually taking several other of Brady’s assistants.

Through most of his career, Brady had specialized in studio photography, which of course was largely due to the limits of early photography which required subjects to sit for a prolonged period of time to get the required exposure.  In 1851 British photographer Frederick Scott Archer made a significant breakthrough using glass plates and a chemical called collodion, which allowed photos to be taken with only a few seconds of exposure.   Brady would take this technology and develop a travelling darkroom–a carriage darkroom that allowed him to take photos outside his studio.  When the Civil War began he immediately started travelling with his darkroom to battlefields.  In fact he was nearly captured at the First Battle of Bull Run.  Before Antietam he had already displayed several photos from the war at his gallery.  But no battle had been covered like Antietam. 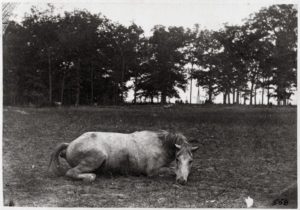 One of Gardner’s most striking photos: the dead horse of Confederate colonel Henry Strong

Gardner took approximately 90 photos at Antietam.  After he transferred the images onto glass plates, he sent them to New York so Brady could exhibit them.  Gardner was not credited at all for the photos, as was Brady’s standard practice with his assistants.  Another innovation Gardner and Brady employed was the stereograph.  For most scenes Gardner took two simultaneous shots.  They could be viewed in stereo using a special viewer Brady set up in his studio. 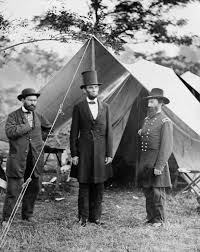 For weeks crowds lined up to see the photos.  For middle and upper class New Yorkers, this was often the first time they were forced to confront the reality of war face to face.  The Times wrote, “ You will see hushed, reverend groups standing around these weird copies of carnage, bending down to look in the pale faces of the dead, chained by the strange spell that dwells in dead men’s eyes.”  Oliver Wendal Holmes Sr, who went to the battlefield to search for his son (Holmes Jr  was injured but survived and later became a Supreme Court Justice), wrote for the Atlantic Monthly, “a truthful sunbeam has delineated in all  their (the battlefield scenes) dread reality….Let him who wishes to know what war is look at this series of illustrations. These wrecks of manhood thrown together in careless heaps or ranged in ghastly rows for burial were alive but yesterday.”

It was not yet possible to produce the images in newspapers (the first newspaper photo was printed in 1880 and it only became commonplace in the 20th century).  Brady’s photos were made available for sale, and he made brisk business from Civil War photos.  Brady did not appear to be concerned with the potential impact his photos had on public sentiment for the war effort.  They were available in different sizes and made their way to mantels and walls of homes in the city.  They were also reproduced in woodcuts and sketches which could reappear in newspapers.  Other than Jacob Riis’ landmark publication  How the other Half Lives, perhaps  no collection of photos has had such an impact. 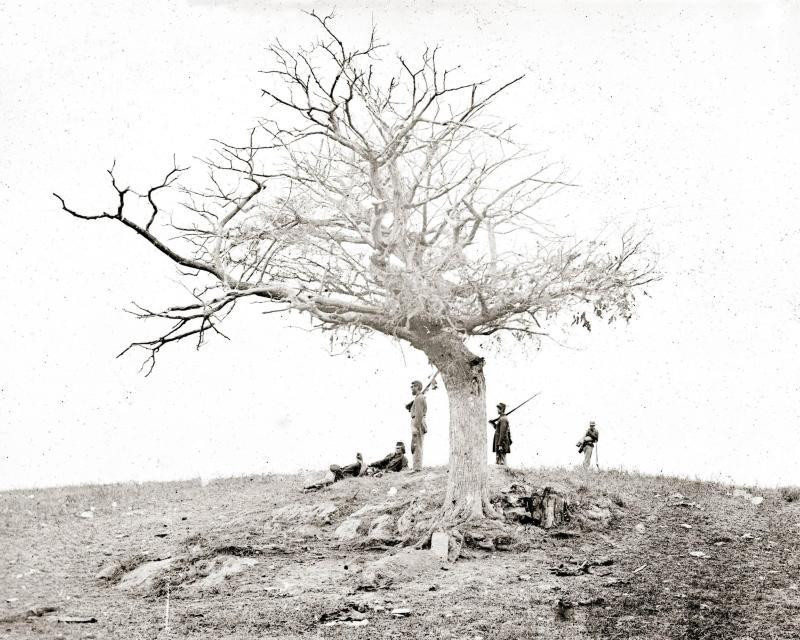 In 2012 the Clara Barton Missing Soldiers Office Museum in Washington DC held an exhibit of Gardner’s photos marking the 150 year anniversary of the battle.  The National Portrait Gallery held a major exhibition of Gardner’s work in 2014, giving Gardner full credit that Mathew Brady had always denied his assistants.  The photos can be be seen at the website of the Library of Congress, and many are also shown at National Park Service’s page for the Antietam National Battlefield.  But many more Americans experienced the Antietam photos through Ken Burns’ monumental PBS documentary The Civil War, which made heavy use of the photos of Brady and his assistants.   Thus, the Civil War was truly brought into our living rooms.