In 1851 the ship America of the New York Yacht Club arrived in Britain on what appeared to be a hopeless task–to defeat the greatest ships in the world.  The New York Yacht Club was only seven years old at that point, challenging the Royal Yacht Squadron which was over 30 years old.  Great Britain was the undisputed master of the seas.  Newspaper publisher Horace Greeley, who was travelling in Europe at the time, advised the Americans to not challenge the British, for they would surely get embarrassed.

The America’s captain was Richard ‘Dick’ Brown.  He was one of the famed Sandy Hook Pilots, who since the 1600s have guided ships into New York Harbor.  He was recommended by the America designer George Steers and America syndicate member George Schuyler as “careful, reliable, faithful, one of the best men in his position I ever saw”.  Brown selected a younger pilot Nelson Comstock as his first mate–unfortunately little is known about him.

The race in 1851 was around the Isle of Wight, where the Royal Yacht Squadron was based.  It would be familiar waters to the British sailors, but it is unlikely Brown had ever sailed around it earlier.  17 yachts entered against Brown’s America.  Though less familiar with the course, he successfully navigated through the Nab rocks on the east of the Isle, a difficult maneuver the others didn’t attempt.

Dick Brown and the America

The America finished first with such an advantage that when Queen Victoria asked who finished second, she supposedly was told, “There is no second, Your Majesty.”   Queen Victoria and Prince Albert personally boarded the America to congratulate Brown; when Albert boarded, Brown insisted the royal wipe his feat.

The result caused a sensation on both sides of the Atlantic.  In the United Kingdom, many ship designers and sailors studied the race and the ship carefully to understand how to improve their vessels.  In the US, newspapers hailed the victory as proof of superiority over their former colonial master–the New York Herald declared, “We have beaten them on land and at sea.”  The New York Yacht Club was presented an ornate silver ewer, later named the “America’s Cup” after the first winning ship.

4. Gertrude Ederle becomes the first woman to swim across the English Channel.

The English Channel has long been a challenge that has attracted hardy athletes from around the world.  It’s sort of a Mount Everest for swimmers.  First crossed by Matthew Webb in 1875, it was next crossed in 1911 and by 1925 only five people has crossed successfully, and no women had even attempted to do so.  The record time so far was 16 hours and 33 minutes by Argentinian swimmer Enrique Tirabocchi. 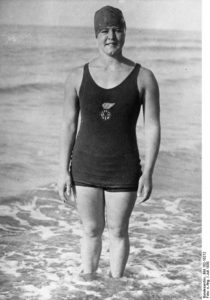 Gertrude Ederle, born in Manhattan’s Hell’s Kitchen, first attempted to swim the English Channel in 1925 at age 19.  She was an Olympic champion swimmer and had made many high profile swims in the US, including swimming from Manhattan to Sandy Hook.  She first attempted to swim the English Channel in 1925 but her trainer, former channel swimmer Jabez Wolffe, pulled her out part-way through.  Ederle claimed she had been fine and could have continued.  She switched trainers, and on August 6, 1926 she attempted again.  This time she swam all the way across in 14 hours and 39 minutes, not only becoming the first woman to swim the channel, but beating the record by nearly two hours, the record for both men and women. She later said, “People said women couldn’t swim the Channel, but I proved they could.”

Ederle’s swim was a huge sensation.  She received a ticker-tape parade in Manhattan, lined with two million onlookers.  She met President Calvin Coolidge, and starred in a movie about her feat entitled Swim Girl, Swim.  She became a celebrity of the Roaring 20s.

Her record stood for only a few weeks; it was beaten on August 30th by German swimmer Ernst VierKotter, though her woman’s record was beaten only in 1950 by American Florence Chadwick.  Up to WWII, only four people had swum the channel faster than Ederle.  Also, Ederle’s swim had been in very rough sea conditions.  Most faster swims by men or women took place in calmer weather.  In retrospect, it was one of the greatest ever athletic feats of endurance and determination.

Babe Ruth made many accomplishments which could be considered for this list, and to some extent this entry is a stand-in for all of them.  He set a new single-season home run record three straight years from 1919-21.  He set a record in 1927 of 60 whose significance still endures.  He hit four home runs in a single world series game twice in his career (two other players have done this once: Reggie Jackson and Albert Pujols). 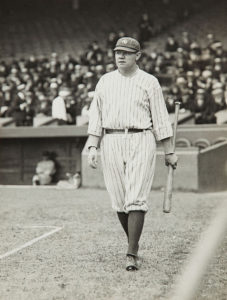 However, his record of 54 home runs hit in the 1920 season, his first season as a New York Yankee, was what really changed the game.  The previous season with the Red Sox, Ruth had set the record with 29, breaking a record of 27 set by Ned Williamson in 1884.  However, Ruth’s mark the following year made Ruth the first player to hit 30 home runs in a season, the first to hit 40, and the first to hit 50.  Throughout the 20s, he was only player to hit 50 home runs (he did so himself 4 times during that decade).  His mark of 54 would not be surpassed by another player until Hack Wilson hit 56 for the Cubs in 1930; Jimmy Foxx was the next American Leaguer to do so in 1932

Ironically, Ruth’s landmark season started slowly.  He injured himself in April and did little in the first month for his new club.  Then on May 1st he hit a home run completely out of the Polo Grounds (then the Yankees home ground).  He broke the record on July 19th, with over two months left in the season.   By the end of the season his tally of 54 redefined the limits of a power hitter, and ended the so-called ‘dead ball era.’

The next season Ruth hit 59 home runs, and also led the Yankees to their first World Series.  In 1927 he hit 60 which remained the record until 1961 when Roger Maris hit 61, aided by a season that was eight games longer than in Ruth’s era.  Since then, three more players have hit more than 60–all of whom have either admitted  use of performance-enhancing drugs or are suspected of it. 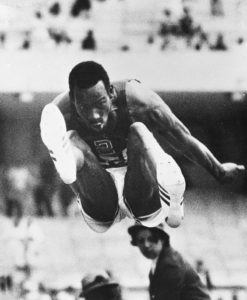 When Bob Beamon stepped onto the runway for his first long jump in the 1968 Olympics, he was already the favorite to win the event.  The Queens native and former Jamaica High School (located in Queens NY) track star had already won over twenty events that year.  It was seen as possible that he would set a new record, especially at Mexico City’s high altitude.  However, what he accomplished was beyond what anyone could imagine.

His first jump saw him soar past the limit of the measuring equipment.  Officials took over 15 minutes to determine the length of Beamon’s jump.  As he waited for officials to bring out a manual tape, Beamon himself supposed he might have broken the record by a couple of inches.  However, his teammate Ralph Boston came up to him and said, ‘the jump was well over.”

Finally, the length of 8 meters 90 centimeters was announced; however Beamon did not understand metric measurements.  He was finally told his record was 29 feet and 2 1/2 inches, nearly two feet beyond the previous record.  Beamon experienced such an emotional reaction to the news that his legs gave way and he suffered a catalepsy seizure.  He competitors came to him and helped him to his feet.  British 1964 gold medalist Lynn Davies said to Beamon, “You have destroyed this event!”

Beamon’s record would last for 23 years, though many observers felt it might never be broken.  Four-time long jump Olympic gold medalist Carl Lewis came close to the record numerous times but never broke it.  However, at the 1991 World Athletics Championships in Tokyo, American Mike Powell jumped 8 meters and 95 cm, two inches past Beamon’s record.  Beamon’s 1968 jump still remains the second longest jump in history, however.  Though no longer the record, Beamon’s jump is frequently cited by sports experts around the world as one the greatest athletic feats ever.

I cannot possibly do justice to Jackie Robinson’s achievement in 1947, the year he broke Major League baseball’s color barrier; nor will I attempt to.  The impact of his achievement would be felt in American society at large, not just in baseball.  It was one of the early milestones of the Civil Rights Movement. 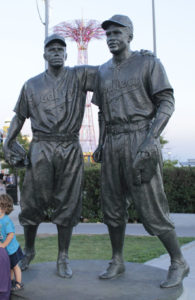 Statue of Jackie Robinson and teammate Pee Wee Reese on Coney Island, portrayed together in 1947

The Brooklyn Dodgers signed Robinson with the intention of making him the first of many African-American signings.  It was well known to any unbiased observer that there were many players in the Negro Leagues capable of competing in the majors.  But as the first to break the color barrier, he was under unprecedented pressure as an athlete.  He was constantly subject to racial abuse from fans, opponents, and his own teammates.  He endured physical abuse on the field.  When travelling hotels often denied him accommodation.  Any player could have buckled in this situation.

Robinson not only endured, he shined.  He led the National League in stolen bases; he was in the top ten in several hitting categories, including 2nd in runs scored.  He deservedly won the Major League Rookie of the Year award. In 1949 he won the National League MVP award.

Like Ruth before him, Robinson led the way during a profound change of the league and the game.  In July of the same year, three more Negro League stars were signed by teams in the American League.  More followed.  When Robinson retired in 1956, almost 7% of Major League players were African-American.  By 1959, it was 17%, and in 1975 it was 27%.