The birth of the New York Times, 166 years ago today 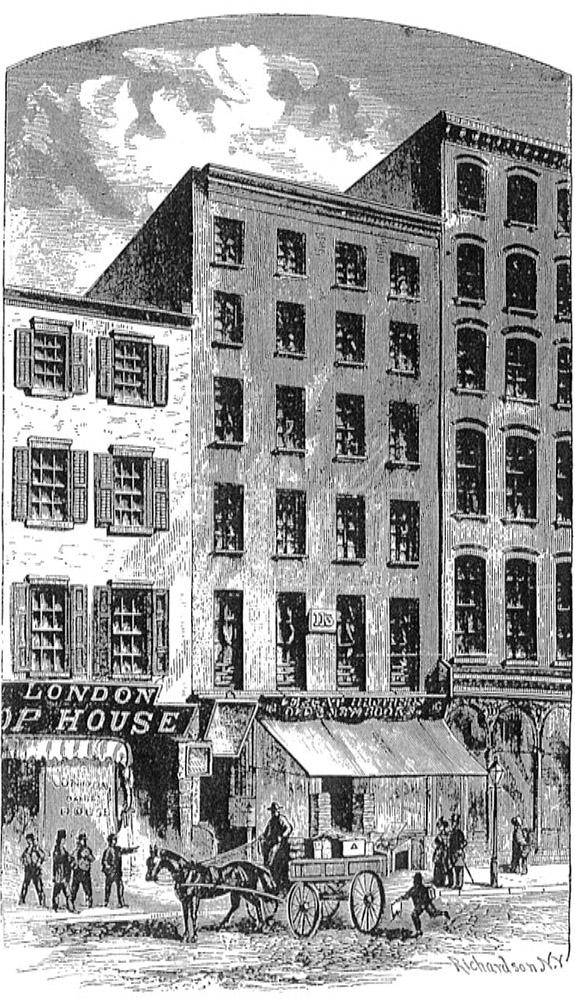 113 Nassau St.  Illustration from “Henry J Raymond and the New York Press for Thirty Years” by A.S. Hale and Company

On September 18th, 1851, an editorial appeared in a new New York newspaper that began as follows: “We publish today the first number of the New-York Daily Times, and we intend to issue it every morning (Sunday excepted) for an indefinite number of years to come.”  The editorial was written by the newspaper’s co-founder, Henry Jarvis Raymond.  The newspaper would later lose its hyphen and the word ‘daily’, and starting in 1861 it would publish on Sunday as well.   But 166 years later, it has so far kept its promise, and remains, despite the struggles of the internet age, one of the most influential news sources in the world.

When one looks at the New York Times’ current headquarters, a 52-floor skyscraper built in 2007 just off of Times Square, it’s hard to imagine the much more humble origins of this institution nicknamed ‘The Grey Lady’.  It was first published in a loft in a brownstone at 113 Nassau Street between Ann and Beekman streets.  The building was then half-finished and the windows lacked glass.  The writers and editors worked by candlelight.  Times writer Augustus Maverick called the conditions ‘raw and dismal.’   The first issue was four pages and cost a penny.

The New York Times was founded in an already crowded newspaper environment by two men–Henry J. Raymond and George Jones.  New York was then teeming with dailies and weeklies, mostly published within a few blocks of City Hall.  In the early 1850s, two papers stood above the others: Horace Greeley’s New York Tribune and James Gordon Bennett’s New York Herald.  The Times was founded as an alternative to these and other papers of the era–less focused on the scandal and sensationalism of the Herald and others in the ‘penny press’, but also lacking what for some was the moral righteousness and partisanship of Greeley’s Tribune.  Raymond founded the Times with the hope of creating a more moderate, trustworthy news source, though like the Tribune it was pro-Republican once the party was founded in 1854.  Raymond himself held many political positions as a Republican and once became chairman of the Republican National Committee.  During his presidency the paper was a staunch defender of Abraham Lincoln.

Raymond and Jones first met while working for Horace Greeley at the New York Tribune in the 1840s.   Both men were from up north.  Raymond was born in Lima in upstate New York and studied in Vermont.  Jones was born that state.   Both worked at various newspapers in the region and Jones also worked as a banker.   Before founding the Times, the two had together tried to takeover the Albany Evening Courier, then a powerful newspaper in New York State edited by Albany political giant Thurlow Weed, also a friend and ally of Raymond.  In 1848 Weed offered to sell the paper to Raymond and Jones, but the deal was blocked by one part-owner who refused to sell, William White.  Had this deal happened the New York Times would have never been born.

After starting at 113 Nassau Street, the Times moved up to 138 Nassau Street in 1854.  Then in 1858 the Times arrived at its address for nearly 50 years–41 Park Row.  This street become known as ‘Newspaper Row’ and was home to several of the most powerful newspapers in the country.  The first Times building on Park Row was a 5-story Romanesque building designed by Thomas Jackson, the first building ever to be entirely devoted to one newspaper.  It was from here that Raymond and Times part-owner Leonard Jerome defended the newspaper during the 1863 Draft Riots with gatling guns mounted on the roof. 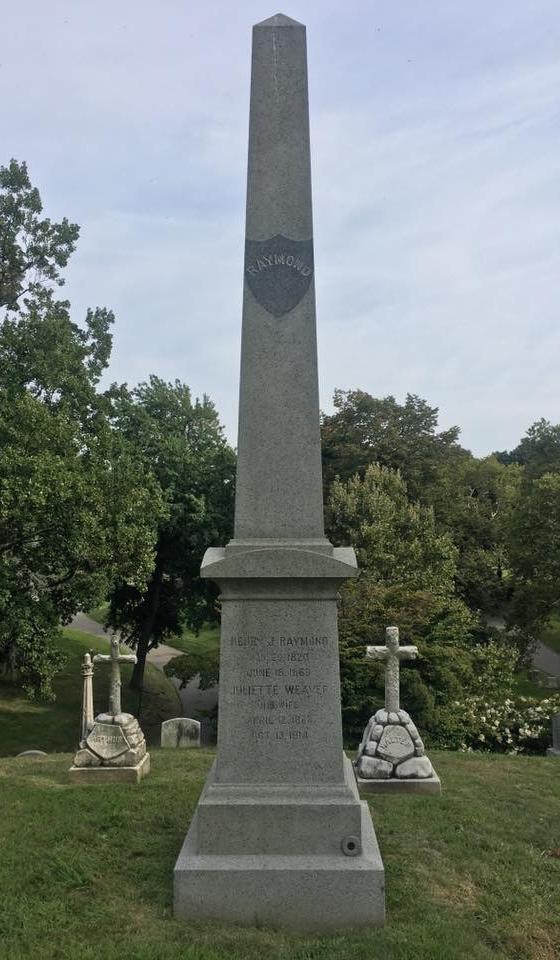 Raymond died in 1869, at only 49 years of age.  The paper was taken over by Jones who was the publisher until his death in 1891.  Under Jones, the Times led the attacks on Boss Tweed, one of the most corrupt politicians in New York’s history, a man who nonetheless had a great deal of power after the Civil War.  However, the Times’ reporting and cartoons by Thomas Nast helped bring his downfall and eventual arrest.  Tweed once offered the Times $5 million to not publish an article on him, but he was rebuffed.  In 1869, the Times also hired its first female reporter Maria ‘Middy’ Morgan, who covered livestock, equestrian events and horse racing.

In 1889 the Times commissioned a new and larger building at the same location, a building which reflected the growing power of the city’s press.  This 16-floor building (2 floors were added later) by architect George Post still stands today and is currently occupied by Pace University. However, the cost of the building helped contribute to a dire financial situation for the Times in the 1890s.  The paper’s circulation dropped to 9000 and the paper was losing $1000 per day when it was bought in 1896 by Adolph Ochs, whose family still owns the paper today.  Ochs would revive the Times and turn it largely into the newspaper we know today, in part by returning to Raymond’s vision of a paper with a moderate to progressive stance that was above tabloid sensationalism.  Ochs would soon move the Times’ offices uptown to Longacre Square, which was promptly renamed Times Square.  The Times remains near Times Square today.

Remarkably, the rather non-descript original home of New York Times at 113 Nassau survived until 2007 when the building was demolished to make way for a 30-floor apartment building, the Lara.  The Times left the building after only three years in 1854.  The building later served as the Leggats Brothers Bookstore, home to George Cram’s atlas company, an Italian restaurant, and lastly, a McDonald’s.  A plaque honoring Raymond and the New York Times once graced the sidewalk.  However, the building was never considered for landmark designation.  Today, both the building and the plaque, and any other trace of the newspaper, are gone. 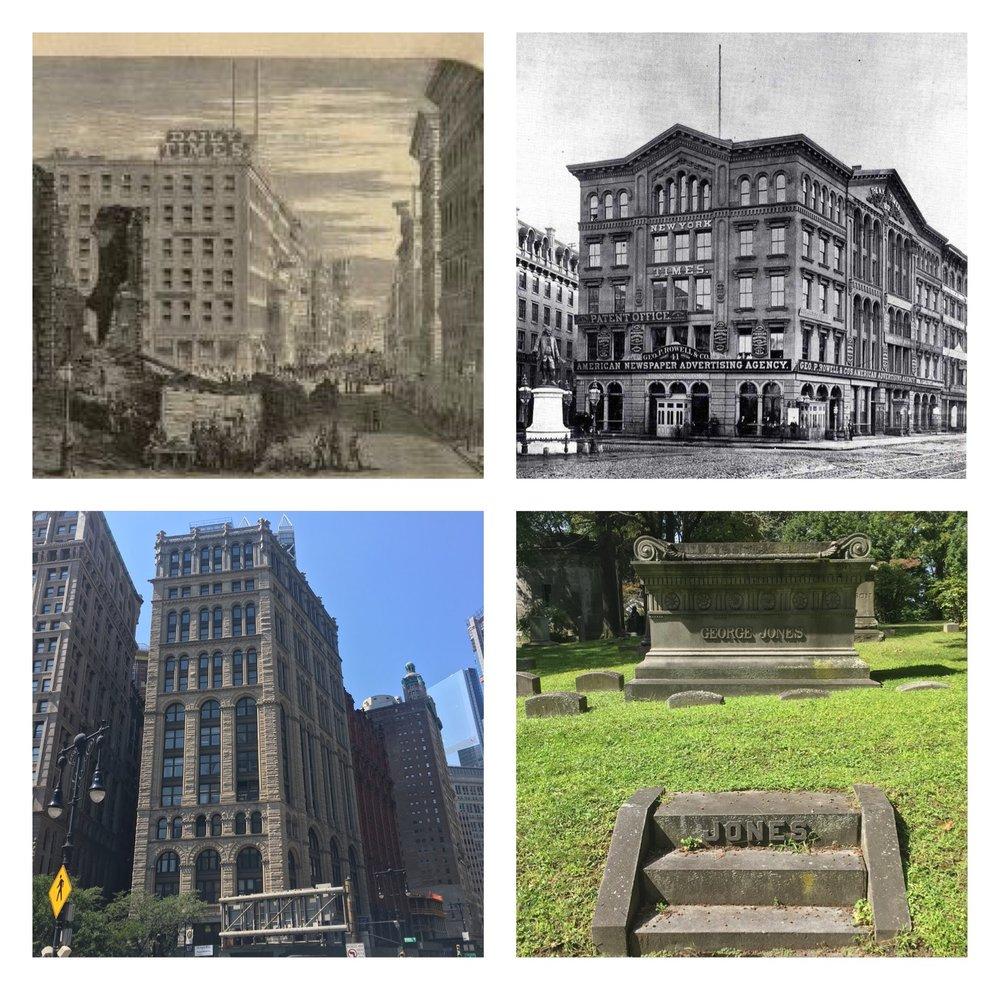