New York has seen a surge of interest in the life of Alexander Hamilton, of course on the back of the smash success of the Broadway Musical Hamilton.  Visitors are flocking to Hamilton related sites such as his grave at Trinity Church, his home Hamilton Grange, and the Weehawken Dueling Grounds.  This summer has seen the opening of two new special exhibits about Hamilton (so far) at the New York Public Library (main branch) and the New-York Historical Society.

The New-York Historical Society is always a great spot for those interested in New York’s history.  Currently in their main hall they are running an exhibit called Summer of Hamilton.  The exhibit is based mostly on items in the museum’s permanent collection.  The highlight are the 2004 Kim Crawley statues of Alexander Hamilton and Aaron Burr each pointing pistols at each other.  Also on display is a desk that Hamilton sat at to write many letters.  One of my favorites is a stone plaque that was placed at the spot of the duel in 1805 by the St Andrew’s Society (Hamilton was of Scottish descent).  The plaque was taken by vandals and was found in a junk store and aquired by the NYHS. 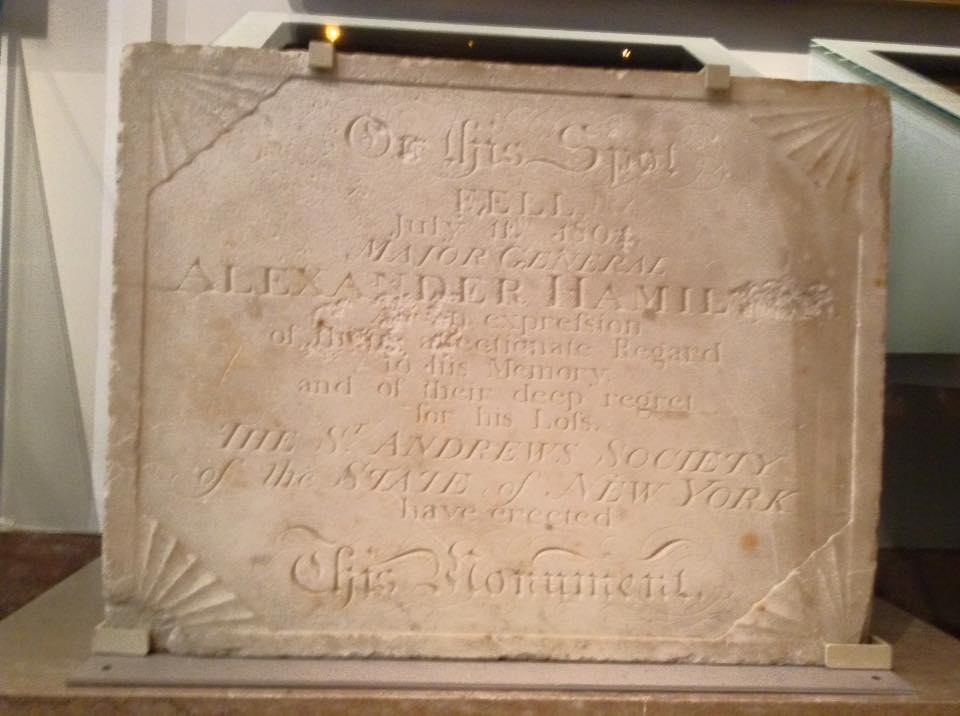 New New-York Historical Society is located at Central Park West just south of the American Museum of Natural History, at 77th Street.  The price of admission $20 for adults.  It is open free of charge on Fridays from 6-8.

The New York Public Library is hosting another exhibit which is actually free of charge.  It’s in the NYPL’s beautiful main branch on 5th Avenue and 42nd Street, a short walk from Times Square and Grand Central Terminal.  It’s called Hamilton: Striver, Statesmen and Scoundrel.  It features many documents Hamilton wrote or contributed to write, including George Washington’s farewell address which Hamilton helped write.