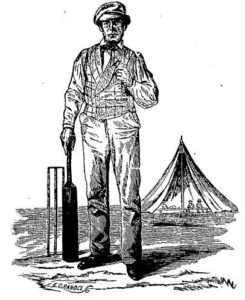 A lithograph of Samuel Wright from an 1856 issue of the New York Clipper, captioned “Veteran Sam, the well-known cricketer.’

Yesterday was the 205th birthday of American cricketer Samuel Wright, the father of two baseball hall-of-famers, Harry and George Wright.  Though a fairly obscure figure in American history (he didn’t have a Wikipedia page until I created one last week), he became the patriarch of the Wright family which would have profound influence on the sporting scene in America–in baseball as well as golf, tennis and cricket.  The family produced two US Open tennis champions and three major league baseball stars, but the legacy runs much deeper than that.

Samuel Wright was born on May 22 1812 in Sheffield England (thanks to blogger and historian Mark Aubrey for the info).  He married Ann Tone (niece of Irish nationalist Wolfe Tone, whose wife Matilda is buried at Green-Wood Cemetery in Brooklyn) in 1830.  In 1832 they gave birth to their first son William Henry Wright–known as ‘Harry’ (There is some debate about Harry’s birth date–some sources put it at 1835).  At some point in the 1830s they moved to the United States and settled in New York City.  Samuel Wright, who was an unremarkable cricketer in England, appears to have chosen to try to come to play professional cricket in the US.  He joined the St George’s Cricket Club in New York, American’s most feared cricket team, nicknamed the ‘Dragonslayers’.  He served as a groundskeeper and a player for over two decades.  He was known as a strong batsman (as batters are referred to in cricket) and bowler.  This was before baseball had established itself as the American’s most popular team sport.  Cricket was a very prominent sporting activity and matches were covered in the press.  St. George had rival clubs in Toronto, Philadelphia, and Staten Island. 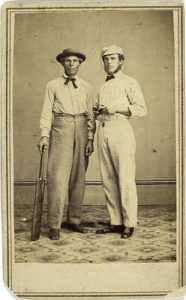 An 1863 photo by Mathew Brady of Samuel Wright, left, holding a cricket bat, and Harry Wright holding a baseball.

Harry Wright played with his father at the St George’s Cricket Club but he became acquainted with baseball early on at the Elysian Fields in Hoboken, home to both St George and the Knickerbockers, one of the first baseball clubs. He would play baseball for the Knickerbockers and the New York Gothams,  In 1866 he moved to Cincinnati to play for the Union Cricket Club, but a year later he was playing baseball again.  He became the manager and center-fielder for the Cincinnati Red Stockings, the first fully professional baseball team in America.  The team, bolstered by stars including his younger brother George Wright at shortstop, went on an 84-game winning streak.  On June 14th 1870, the streak game to an end in front of 20,000 people at Brooklyn’s Capitoline Grounds when the Red Stockings lost to the Atlantics 8-7 in ten innings.  The score was tied 5-5 after 9 and by the rules of the time could have ended in a tie; but Harry Wright asked to continue.

The Red Stockings would fold in 1871 due to the expense of maintaining baseball’s first all-professional club.  However, the nickname of the Cincinnati Reds is an homage to the team Wright managed.  Wright then went to Boston, and managed the newly formed club the Boston Red Stockings until 1877.  That team was one of the founding members of the National League in 1876 and would later change to the Boston Braves, and now exist as the Atlanta Braves.  They wear red on their uniform as an reference to their origins.  It is the oldest professional baseball club in the US.  Harry Wright would later manage the Providence Grays and the Philadelphia Quakers (today the Phillies).

Harry Wright’s baseball career stretched from the sport’s origins in New York to the establishment of professional baseball and the formation of the National League.  Historian Bill James said of Wright, “Harry didn’t play in the major leagues; he just invented them.”  He also organized a baseball tour of England which included an exhibition match between Boston Red Stockings and Philadelphia Athletics at Lords Cricket Ground.

Harry’s brother George was a star on both his Cincinnati and Boston teams–one of the greatest shortstops of his time.  He settled in Boston and founded the Wright & Ditson Sporting Goods company.  It still exists today.  He also played cricket at the Longwood Cricket Club.  He became interested in golf and created America’s second public golf course called Franklin Park in Boston.  He also donated land to the city which was turned into another golf course that bears his name today: The George Wright Golf Course.

With a family sporting prowess that stretched across three generations, a legacy that is still seen today in at least four major cities, and with significant impact on the sports of baseball, cricket, golf, and tennis, no family has impacted the American sports landscape like the Wrights have.  And it started with a cricketer from Sheffield who came to New York like millions of others in search of a new life.