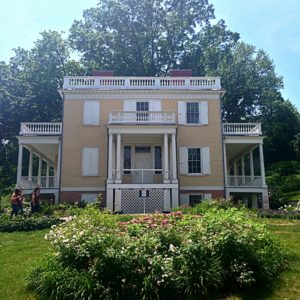 New York is experiencing Hamilton-mania as fans in New York and from around the world are desperate for tickets for the hottest Broadway show perhaps ever.  The musical about the life of Alexander Hamilton is setting records and is the talk of the town.  Whether you’re fortunate enough to have have the sought-after tickets or you’ve just listened to the soundtrack, you can immerse yourself in Hamilton’s life at several places in New York.

Alexander Hamilton arrived in the US from the Caribbean island of Nevis in 1772, first studying at a boarding school in Elizabeth, New Jersey, before entering Kings College (today’s Columbia University) in 1773.  Throughout his life he was a leading citizen of New York (the only New Yorker to sign the Constitution and one of the primary Founding Fathers of the United States) and his legacy exists all over the city and the surrounding area.

This is a list of 6 essential places to visit for Hamilton fans (besides the Richard Rogers Theatre of course).  While there are many more which I’ll include in a map linked below–these are places that are more than a mere plaque or statue (New York City has 6 statues of Hamilton).  They are sites where you have a tangible experience with the Founding Father either through artifacts or an actual building or site he spent time at. 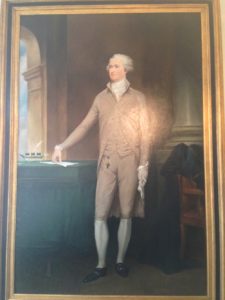 A portrait of Hamilton at the Grange by John Trumbull

The only home Hamilton ever owned still stands in Harlem and is now a National Memorial run by the National Parks Service at 414 West 141st Street.  It is open to the public and free of charge.  It contains several Hamilton artifacts, including a piano his daughter actually played on, and exhibits of his life as well has a history of the Grange itself.

Manhattan’s Trinity Church, at the beginning of Wall Street, is where Hamilton is buried.  Next to him is his wife Elizabeth Schuyler.  Church is also the site of the first location of Columbia University, founded as King’s College in 1755.  The first classes were held at the church schoolhouse on the grounds (no longer standing) and Hamilton probably attended the church from time to time (that building now longer stands–the current church was built in 1846 at the same site).  In Hamilton’s time the college was at College Hall, a building that stood Church and Murray Streets until 1847 (a cornerstone of the building is at Low Library of today’s campus). 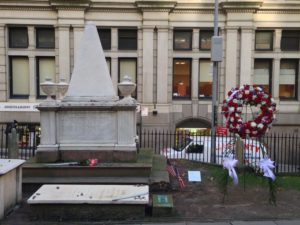 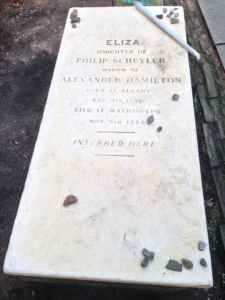 Grave of his wife Elizabeth Schuyler 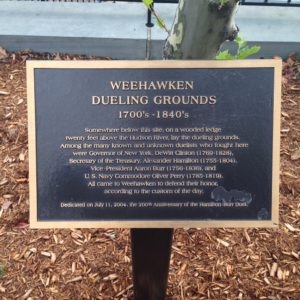 In July 11 1804 duel between Aaron Burr and Alexander Hamilton resulted in his death. Burr had been a political rival for years and the duel was meant to settle scores between the two, though not necessarily fatally.  The dueling grounds had been a popular spot of duels which were outlawed in New York.  The actual ledge where the duel took place is gone but a nearby spot is now a historic site.  A bust of Hamilton is there and several historical markers detail the event.  The Dueling Grounds also offer a panoramic view of New York City. Though best visited by car, pubic transport options are available from Manhattan, including the Hudson River Ferry. 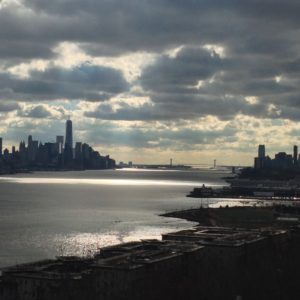 View from the Weehawken Dueling Grounds 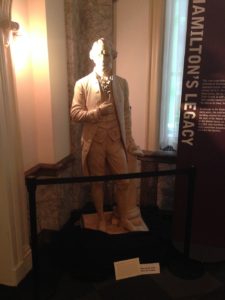 The Museum is inside the 1928 Bank of New York Building at 48 Wall Street, a bank that was founded by Hamilton in 1784.  On the outside wall is a cornerstone of bank in 1797.  In addition to several exhibits related to finance and the history of money, the museum features the Hamilton Room, containing several artifacts related to the Founding Father, including several documents he signed.

Founded in 1762 by Samuel Frances, this historic site is located at 54 Pearl Street.  It was a popular tavern during the late Colonial, Revolutionary, and early Federal period of New York.  It was frequently visited by George Washington and other prominent figures of the time.  In 1804 Hamilton and Burr met there the week before their duel for a peaceful meal.  The tavern still operates, and the upper floors are a museum.  The present-day building is mostly a restoration done in 1907–though a few parts of the foundation and the walls may be original.  Unfortunately there isn’t that much about Hamilton in the Museum–but Washington and Lafayette are heavily featured. 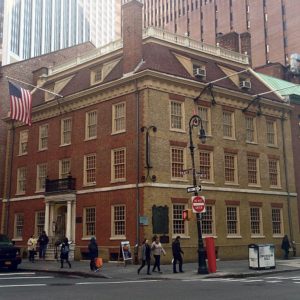 Frances Tavern, where Hamilton had his final meal. 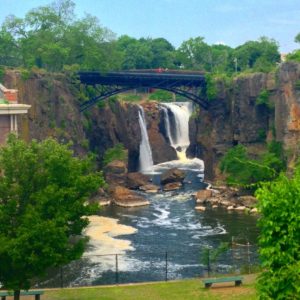 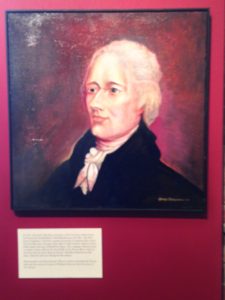 Portrait of Hamilton at the Paterson Museum

This is the only one of the 6 sites that requires a day trip.  Paterson, New Jersey is located 20 miles from New York and can be reached by car or by train from Penn Station.  The magnificent waterfall, itself worth a trip and is now a National Park. It was chosen by Alexander Hamilton as a place to power industry.  In 1791 he founded the Society for Establishing Useful Manufactures at the Falls.  Paterson became a planned industrial town and would become the site of manufacture of firearms (Colt Manufacturing was founded in Paterson in 1836), textiles, locomotives, and more.  A 1922 statue of Hamilton overlooks the Falls.  The nearby Paterson Museum is packed with exhibits of Paterson’s industrial history, including a small Hamilton section.

Other places:
New York City and the surrounding area features many more sites connected to Hamilton, some marked by plaques or statues.  There are also sites connected to his political rival Aaron Burr, and a number of locations related to George Washington’s Continental Army (Hamilton served as his Chief-of-Staff.), particularly the Morris-Jumel Mansion which he used as a headquarters.  See the map below for a comprehensive list of Hamilton-related sites in NY and the surrounding area.