The Game of the 19th Century: The Cincinnati Red Stockings versus the Brooklyn Atlantics in 1870

On June 14th 1870 two baseball teams met in Brooklyn in one of the most highly anticipated matches of the 19th century.  One team was a reigning and 8-time champion.  The other was on an 81 game winning streak.  By the end of the match, there had been 6 lead changes and plenty of controversy.   It ended with a rally in extra innings to end one of the longest streaks in baseball history.  The match took place at the Capitoline Grounds in Brooklyn between the Brooklyn Atlantics and the Cincinnati Red Stockings.

The Brooklyn Atlantics playing the Cincinnati Red Stockings at the Capitoline Grounds in Brooklyn on June 14th, 1870

In 1870 baseball clubs were mostly amateur at least officially.  Rumors had abounded for over a decade that clubs paid some players, but they claimed to be fully amateur.  The sport of baseball definitely started that way.  The first clubs such as the New York Knickerbockers or the Brooklyn Putnams started as groups of bookkeepers, firefighters, insurance salesmen, and other professionals playing in their spare time.  Over the years the game became more organized and more commercial.  Teams started to charge admission to matches.  A league was formed: The National Association of Base Ball Players (NABBP).  Champions were declared.  The stakes of winning matches grew. 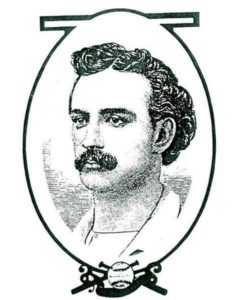 Lip Pike, a 2nd baseman for the Atlantics and one of first Jewish baseball stars.

The game of baseball as we know it started in the New York area.  While it spread to other cities, the strongest teams in early years in what is now New York.  Successful  teams before the founding of the first professional league in 1871 included the New York Mutual, the Union of Morrisania (in the Bronx)  and the Brooklyn Excelsior.  But during the 1860s the most dominant club was the Brooklyn Atantics.  They won 8 NABBP championships.  They featured stars like outfielder Jack Chapman, known as the “Death to Flying Things, catcher Bob Ferguson, the first known switch-hitter, LIp Pike, a star hitter and second baseman,  and slugger Joe Start.  Lip Pike was one of the first known Jewish baseball players.  Starting in 1862, their home ground was the Capitoline Grounds in today’s Bedford-Stuyvesant. 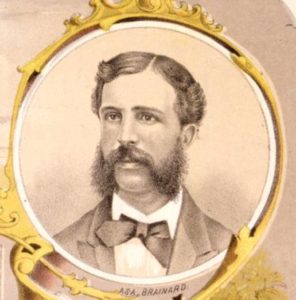 Pitcher Asa Brainard, the origin of the term ‘ace’.

The Cincinnati Red Stockings were a much newer club.  Formed in 1866, they were soon joined by Harry Wright, a cricket and baseball player who moved from New York to join the Union Cricket Club in Cincinnati, but quickly became the player-manager of the Red Stockings.  He began bring in stars from the East, mostly New York, including his own brother George Wright at short stop and star pitcher Asa Brainard from the Brooklyn Excelsior (the term ‘Ace’ meaning a star pitcher is derived from Brainard).  By 1869 each player was paid a salary, making it the first openly professional team.  In 1869 the Red Stockings won all 57 of their games.  The next  year they continued their streak.  In the summer of 1870 they journeyed East to play the toughest teams. On June 13th they defeated the New York Mutuals to bring their streak to 81 games.  Their next match was with the mighty Atlantics. 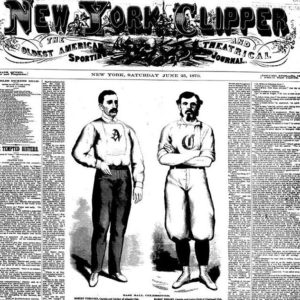 An illustration of the two captains of the match in the New York Clipper sporting newspaper: Brooklyn’s Robert Ferguson and Cincinnati’s Harry Wright.

Papers predicted Cincinnati would win.  They had beaten the Atlantics the previous year 32-10.  But this Atlantics team didn’t fear the Western upstarts.  They were a squad of grizzled veterans who had won multiple championships.  In fact they had claimed the 1869 National Association title despite Cincinnati’s perfect season due to the rather arcane rules of the time (teams didn’t have a uniform schedule and there was no league table).  This background created intense anticipation for the match.  The crowed was estimated at about 20,000, one of the largest ever crowds for a sporting event. The New York World reported:

“Little urchins shouted, ‘score cards, names and positions of both nines,’ all the way from Fulton Ferry to Bedford, and all Brooklyn seemed awake to the event of the day. Stores were deserted, boys who could not obtain permission to leave school played hooky, and hundreds who could or would not produce the necessary fifty-cent stamp for admission looked on through cracks in the fence, or even climbed boldly to the top, while others were perched in the topmost limbs of the trees, or on the roofs of surrounding houses.”

Cincinnati as expected opened the scoring with three runs early.  But Brooklyn got back into it and took the lead 4-3 in the 6th.  Both teams added runs to bring the score to 5-5 after 9 innings.  In those days extra innings were not mandatory.  Cincinnati could have opted to preserve their unbeaten streak by accepting a tie.  But Cincinnati manager Harry Wright asked to continue.  The New York Tribune reported that while the score was small, the “excitement was unbearable”. 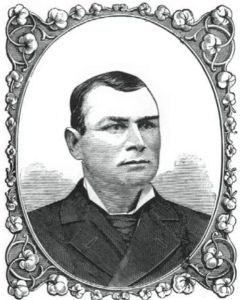 Atlantic Joe Start’s 11th inning triple set up the tying run and was one of the plays of the game.

The 10th inning went scoreless.  However, the Atlantics had men on base but their effort was foiled when Cincinnati shortstop George Wright let a pop fly drop and converted an easy double play (there was no infield fly rule then).  In the 11th inning the Red Stockings appeared to have won the match with two runs to make the score 7-5.  But once again the Atlantics rallied.  With a runner on, Brooklyn’s Joe Start smashed a ball over right fielder Cal McVey’s head for a triple, which was aided by a spectator jumping on McVey’s back (just part of the home field advantage in those days).  The tying run was then driven in by Bob Ferguson.  Ferguson then scored the final and winning run when George Wright botched a double play that could have ended the inning. Brooklyn was victorious winning 8-7. 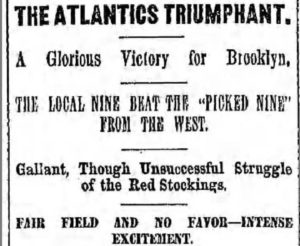 Headline in the Brooklyn Daily Eagle

The New York papers lavished praise on the triumphant Atlantics and the game itself.  The Brooklyn Daily Eagle claimed that the ‘local nine defeated the picked nine.’  The New York Times called it the ‘most exciting game on record.”  The New York Sun claimed the Atlantics’ fans celebrated like ‘escaped lunatics.”  The Times judged the partisanship of the crowd harshly, calling it “the most discreditable gathering we have seen at the Capitoline Grounds in years.”  But the game was immediate recognized as one of the greatest ever played, and remains a significant milestone in the history of the game. 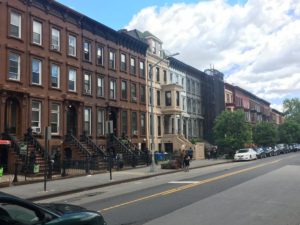 The site of the Capitoline Grounds today. The Grounds were bound by Nostrand, Halsey, Marcy, and Putnam Streets.

Both clubs would fold in the following years.  With no tenant the Capitoline Grounds became run down and was demolished in 1880 and the land was sold for housing.  There’s little evidence of the ground today.  In New York, perhaps the best places to visit related to this historic match are the city’s cemeteries, where many of the players are buried.  The most significant one is Green-Wood Cemetery in Brooklyn, the resting place of three players on that day: Asa Brainard, Jack Chapman, and Charlie Smith.  Also buried at Green-Wood is Alexander Hamilton Weed,  a co-owner of the Capitoline Grounds.  Atlantics captain Robert Ferguson is buried at Cypress Hills Cemetery.  Lip Pike is buried at  Salem Fields Cemetery. 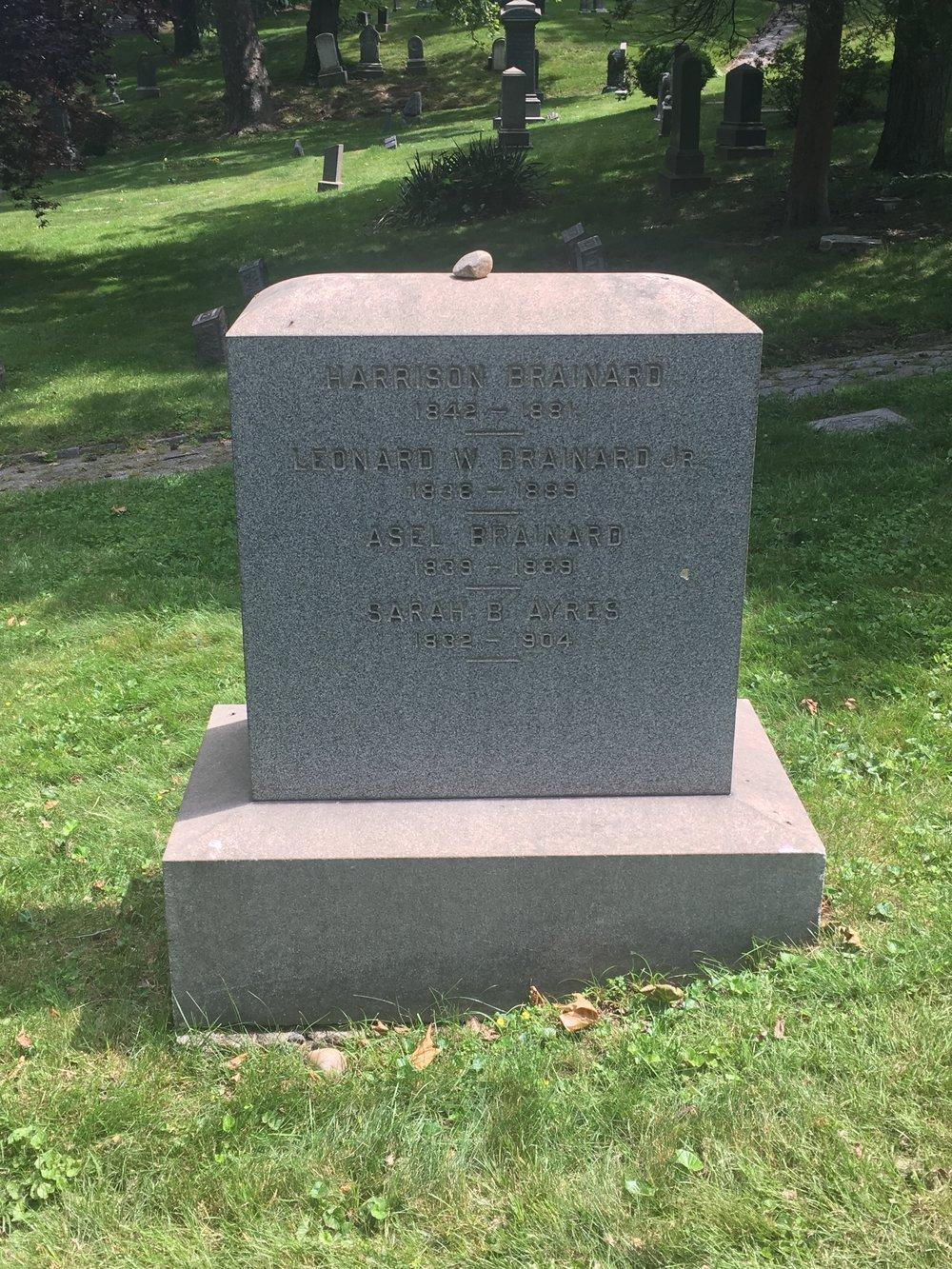 Grave of Asa Brainard at Green-Wood Cemetery in Brooklyn