We were all New Yorkers then

I was living abroad in Moscow, Russia when September 11th happened.  I was teaching English lessons and heard bits of news from clients during the afternoon (it happened after 4 pm there). At first I was sure it was a terrible accident.  Someone told me about a second plane but I assumed he had heard the same story twice or something.  Then walking home my wife called me, clearly shaken, and told me that both of the Towers were completely destroyed.  We had both been to WTC multiple times. 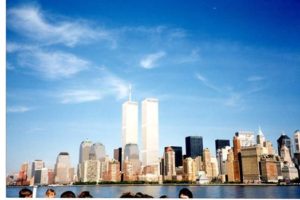 My photo of the Twin Towers in September 1998.

I immediately went home and glued myself to the news for hours and days, listening to NPR and the BBC via the internet.  Back then I was on dial-up so I mostly depended on audio and text reports so I wasn’t exposed to the constant repeat showings of the video that many people saw. 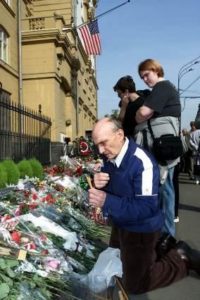 Flowers outside the US Embassy in Moscow

Via the Internet and satellite TV, September 11th was a global news event of unprecedented proportion.  I can’t think of an event in my lifetime that captured the whole world like that, except perhaps the finals of World Cups.   I was born after the Moon landing and JFK’s assassination.  Perhaps Lennon’s death was comparable.  The entire world focused on Lower Manhattan.  Everyone saw the images of the aftermath so familiar now:  the video of the towers falling, the debris, the mayor leading the response, the firefighters working tirelessly, etc.  The French newspaper Le Monde said, “We are all Americans.”  But we were all New Yorkers.

My wife and I visited NY later that year (we moved to NY permanently in 2012) and of course we saw what we could of the World Trade Center site, called Ground Zero.  We saw the temporary memorial at the fence of St. Paul’s Chapel, a moving collection of flowers and photos of the victims.  We saw already the ways the city had changed as a result, with so much more security.  We heard stories from people who witnessed the event, including a friend who was in a neighboring building that morning and saw the second plane hit. 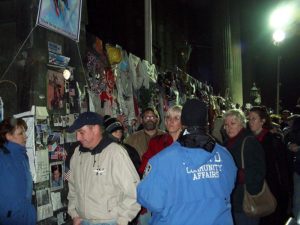 The makeshift memorial on the fence around St. Paul’s Chapel next to the World Trade Center.

10 years later the 9/11 Memorial opened at the site.  It continues to draw people from all over the world–four million during its first year.  In 2015 the observatory at One World Trade Center opened.  Nearly everyone who visits New York now visits the site.  It’s a place they saw on the news, and know a great deal about.  They appreciate the magnitude of such a loss of life.

For New Yorkers who lived here at the time, the relationship with the World Trade Center is much more personal and evokes powerful emotions.  The site is a mass graveyard, often for friends or loved ones.  New Yorkers witnessed the events with their own eyes, not on the news.  They were intimately familiar with the buildings, and some went there every day.  I know many people who experience powerful feelings whenever they return to Ground Zero, and some who cannot bring themselves to return.

For many New Yorkers the contrast between their visit to the 9/11 Memorial and that of the thousands of visitors there can be jarring.  People are there who had little connection to the events, taking pictures, eating, posing for selfies, and otherwise acting as common tourists.  Furthermore, there’s a sense that the Memorial is not for New Yorkers.  To an extent that’s true perhaps.  The area is designed to accommodate mass tourism.  Brochures are available in over 10 languages.  The area is filled with tour groups.  And right next the Memorial is the One World Observatory which is an attraction with a very Disneylike feel.  Moreover, the recent opening of the (rather upmarket) Westfield shopping mall adjacent to the Memorial seems rather crass to many. 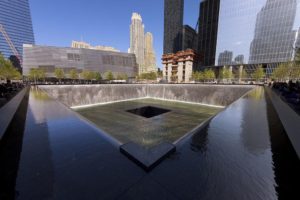 One of the pools at the 9/11 Memorial

For people visiting New York who haven’t experienced the 9/11 Memorial, a respectful visit to the site is certainly high on the list of things to see.  There are few complaints from locals or visitors about the memorial itself.  The giant pools and waterfalls drown out surrounding noise to allow reflection.  The sight of the names is very moving.  And the site creates a huge sense of scale which communicates the magnitude of the events here.  The design of the memorial accommodates crowd flows well.  And it’s also very near other important historic sites and attractions including the observatory atop 1WTC, St Paul’s Chapel with George Washington’s pew inside, Trinity Church where Alexander Hamilton was buried, Wall Street, etc. 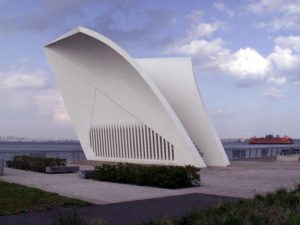 Postcards, a memorial dedicated to 274 Staten Islanders who died.  The memorial is oriented towards the exact spot where the Twin Towers stood. 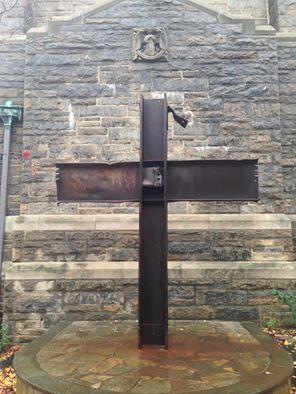 A cross made from debris of the Twin Towers at the Church of the Good Shepard in Inwood, Manhattan

To appreciate the events of September 11th off the beaten track, I recommend visiting one of the many other memorials dedicated to the event throughout the city and the metropolitan area.  There are 9/11 Memorials throughout the five boroughs and many towns within commuting distance have memorials dedicated to the members of the community who were victims.  A ferry ride away from Lower Manhattan is the ‘Postcards’ memorial dedicated to all Staten Islanders who died.  At nearby Hanover Square is the Queen Elizabeth II Garden, a memorial to the 67 British victims of September 11th. In Coney Island there’s the Brooklyn wall of Remembrance.  And there are countless others.  Just off of Times Square is the Pride of Midtown firehouse which lost 15 firefighters on 9/11 and there’s a plaque honoring them outside. 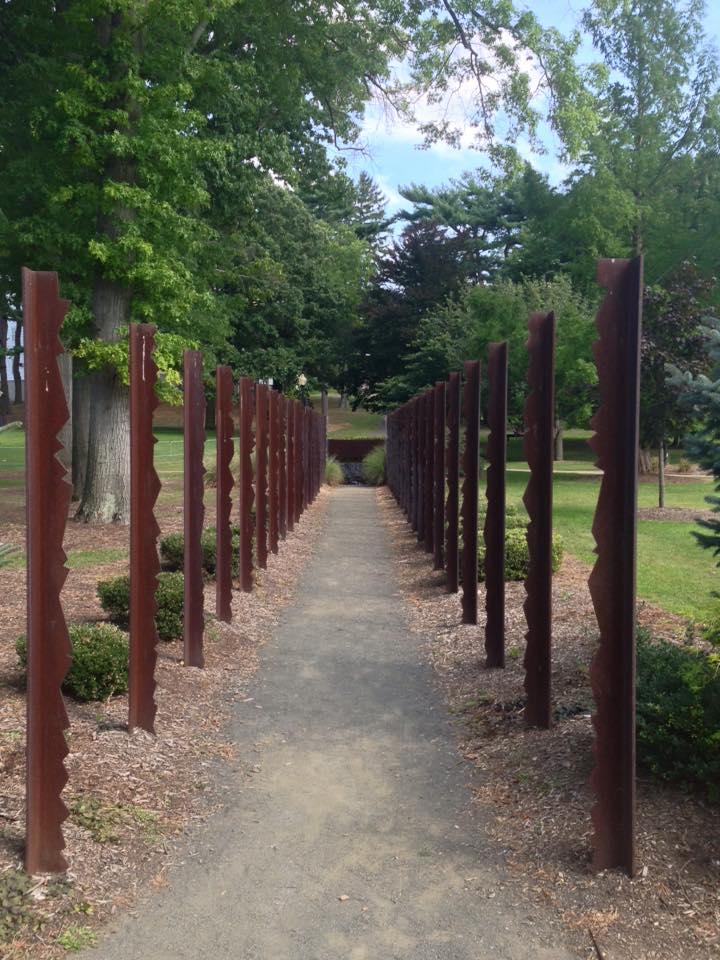